Quantifying the relationship between natural particles in the atmosphere and climate

In our recent paper we show that the cooling effect of natural atmospheric particles is greater during warmer years and could therefore potentially reduce the amount that temperatures rise as a result of climate change.

Particles in the atmosphere can alter Earth’s climate by absorbing or reflecting sunlight. These particles are often produced by human activities, such as the combustion of fuels for power, but there are also many naturally occurring particles in the air.

In this work we combined atmospheric measurements with a computer model (GLOMAP) to explore the effects of two natural particle sources: smoke from forest fires and the sticky gases emitted by trees.

Natural particles can alter the climate, but they are also strongly controlled by it. For example, when it’s warmer plants release more volatile gases from their leaves – these are the gases that give pine forests their characteristic smell. Once in the air these gases can stick together to form tiny particles. More particles in the atmosphere reflect away the Sun’s energy, which helps to cool the planet. This cooling acts to offset some of the initial temperature rise and is known as a negative climate feedback. 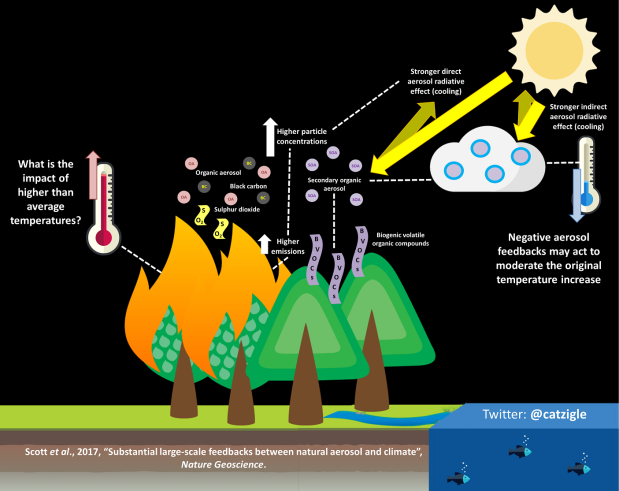 Overall the response of the Earth’s climate to an initial warming is to amplify that warming, i.e., a positive feedback. The natural feedbacks we quantify here might act to offset a small amount of the warming due to climate change but they are not enough to counteract other strong positive feedbacks in the climate system; reductions in greenhouse gas emissions will still be required to prevent dangerous levels of global warming.

Our research highlights the need for these complex interactions to be well represented in climate models. The latest generation of models being used for future climate projections (Earth System Models) include more detail about the way that the atmosphere and the land surface interact than ever before – but it’s important that we can isolate the role that these processes are playing as the climate evolves.